Thinking about taking a trip to the island of Oahu? During your research you may have come across the Go Oahu City Card. Check out my thoughts on it! 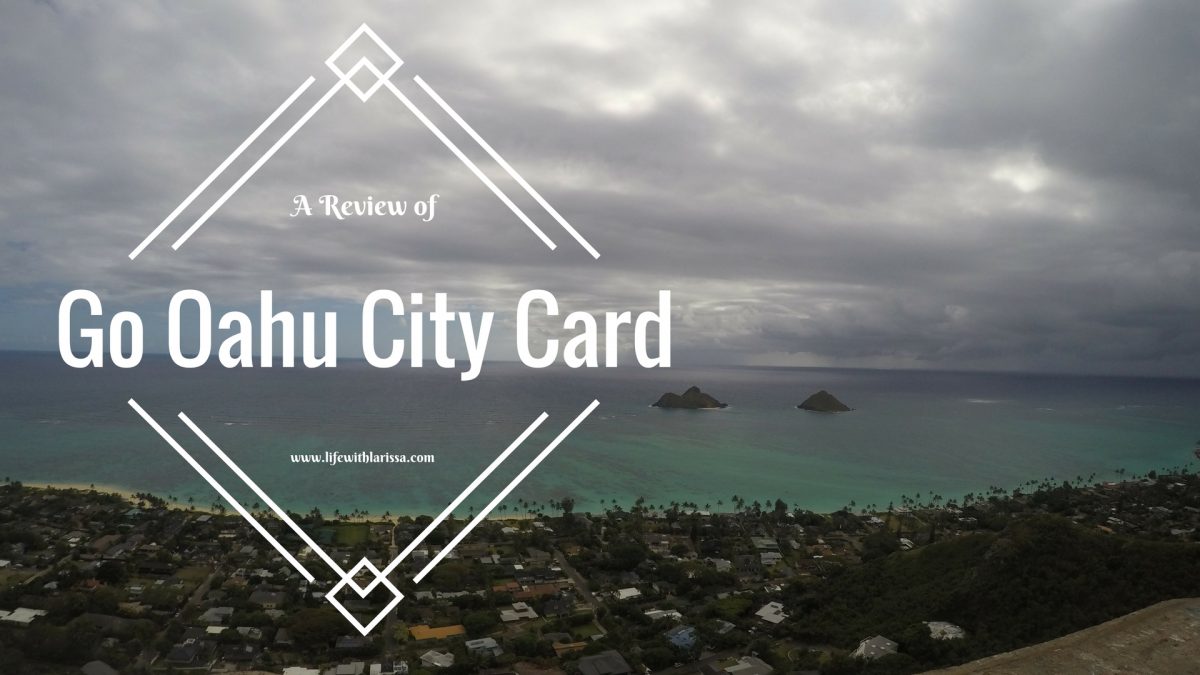 The first week of April, I went on a trip to Hawaii, specifically the island of Oahu. While doing research and talking to my friends who live there, I thought maybe it’d be a good idea to try the Go Oahu City Card. I was meeting up with my friends, but they were working the first half of the week that we were there. So we decided to get the 3-day pass. It allowed us to explore the island ourselves the first half of the week, and the second half of the week, we spent with my friends. Before deciding to purchase this pass, I read up on some reviews regarding the pass, and the viewpoint went about 50/50 –positive vs. negative. I decided to take the leap of faith, and hoped that I would end up like someone with a positive review. This is my take on the Go Oahu City Card:

The Go Oahu City Card is a pass that allows you to explore the various tours, attractions, and features the island has to offer. You have the option of choosing between a 1, 2, 3, 5, or 7-day pass. You even have the option of building your own pass by choosing which attractions you’d like to include. After you decide which pass you want and you purchase it, you can choose to download it onto your phone or print it. We went with printing, and it came with a massive packet detailing everything that was included, the hours of that attraction, the address, and a short detailed description. I really liked the packet because it was easy to go through and highlight which ones were of great interest to us, and cross those off that weren’t. To use the pass, just show it at each place and you’re good to go! It is important to note that the pass has to be used in consecutive days and the pass is per person, not per group.

There are so many things that you can choose to do. It would be impressive (to me), if someone managed to participate in all the offered attractions. Granted, we only had the 3-day pass, so maybe if we’d had the 7-day pass, it would be more manageable. Anyways, the pass includes various tours you can partake in –catamaran tours, day tours, city tours, hiking tours, and jungle tours. You can use your pass to rent various water equipment –paddleboards, kayaks, canoes, and snorkeling equipment—as well as land vessels, such as bikes or mopeds. You can get into water parks, museums, and shows. If you purchase the 3-day pass or longer, it comes with one premium attraction out of six. You don’t have to decide which one you’d like to do when you make the purchase, but I recommend deciding relatively soon, as you’re probably going to need to make a reservation. For our premium attraction, we chose the Polynesian Cultural Center, as we had heard phenomenal things about it!

It pained me a little to spend that much money on two passes, but for us, it ended up being the better deal. If I had paid gate price for each activity we did, I would have gone well over the price I paid for the passes. The price won’t necessarily be the same for everyone, as it depends on which package you decide is best suited for you, and your travel companions, if you’re travelling with any. The one day pass won’t cost as much as the seven day pass. If you’re building your own pass, that price will fluctuate as well, depending on which attractions you include and how many.

I bought my passes through Groupon, but there are other places to go. The website of the pass is www.smartdestinations.com, so you can obviously go there. You can also buy the passes through Expedia or Costco. I’m sure there’s more places this pass can be found, but that’s what I ran into when I was looking into it.

As goes with anything, there’s some good and there’s some bad. For us, the good outweighed the bad, but that will be a judgement call that you will have to make for yourselves. Here’s my pro/con list that may help in your decision-making process:

Overall, I enjoyed having the Go Oahu City Card with us on our first trip to Oahu. If I had to do my trip all over again, I would definitely get this card. The two things I would change though are:

1- using it to its fullest potential [i.e. getting out the door early in order to cover multiple attractions in one day]

2- planning way ahead of time [i.e. planning which attractions are close to each other and doing them on the same day].

I went on this trip with my sister and she enjoys sleeping in. Now, there’s nothing wrong with that, but when most of the attractions close at 4:00pm, it’s imperative to get out the door early. So if you’re planning on taking a trip to Oahu and using this pass, I recommend wake up early and tackle the day!

Have you used the Go Oahu City Card? What did you think about it? Do you have any questions that I didn’t answer about the pass? Let me know in the comments!