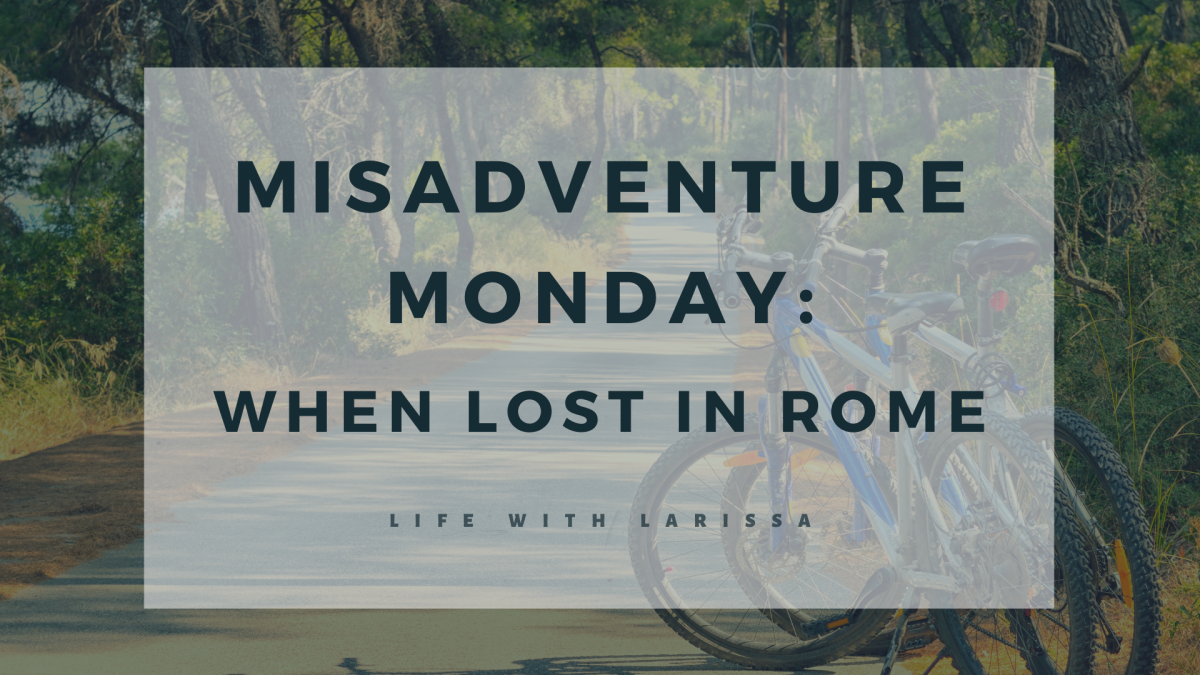 Welcome to the Misadventure Monday series, where I share what went wrong during my travels. It may have been something little, or it may have impacted the entirety of the trip. You’ll have to keep tuning back here to know. Today, I’m sharing about a mishap during my first solo trip. I went to Europe, visiting various cities in France, Italy, and Belgium. So many experiences and emotions took place during this trip; however, this story takes place from the train leaving France to finding my Airbnb in Rome.

It didn’t occur to me I didn’t speak Italian until the train was crossing into the country from France. I guess I didn’t think about it because I speak French, a romance language, and Italian is also a romance language. Looking back, it doesn’t make any sense at all, but at the time, it made logical sense to me. Anyway, back to the story…

As I made my way down to Rome, the sun began to set. I wasn’t too worried I would be arriving to my Airbnb after dark. Explicit directions given by the host via the platform assured me it would be foolproof for me to find the residence: “Arrive to Rome Termini station. Get on the metro. Head in this direction. Get off at this stop. Take this bus. Get off at this spot. Walk to x. The house is here.” No problem. I’m a pro at this by now, right? Wrong. Professionals tend to anticipate what could go wrong and have a Plan B available at the ready. On this trip, I learned I was no professional.

Disembarking from the train, I dutifully found the metro – the first course of action for my journey to my Airbnb. To my dismay, the metro was closed. Plan A quickly fell to shambles. I couldn’t follow the directions if I couldn’t even complete the first step.

Thankfully, I activated my cell service a few cities ago in France, as I had gotten lost trying to get to that Airbnb (another story for another day). I contacted my host and he gave me an alternate route, which proved to be significantly vaguer than the original instructions. Oh well. I’m a smart, independent woman. I can figure it out. At least that’s what I told myself.

The Anxiety Starts to Escalate

I walked over to the bus station situated not too far away. Locating the correct bus number, I squeezed onto the overcrowded vehicle. Compressed on the bus, I started doing deep breathing exercises to prevent a full on anxiety attack. And of course while I’m concentrating on my diaphramg movements, a police officer stares at me, concern written all over his face. I quickly avert his gaze. I mean technically I was fine – I was just thinking of every single possible scenario that could go wrong and that was what was freaking me out. He didn’t need to know that though.

We reached the bus depot and I disembarked. I literally didn’t know what to do at that point – so I just sat on a large rock. And I sat, and I sat. Sometime later, another bus pulled up and I recalled the host mentioning that number so I clambered on that less crowded bus. There were about five or six of us on it. I approached the driver and asked if he could let me know when I reached the spot I was supposed to get off, attempting to show him the address. He refused to look, stating he didn’t understand me, and instructing me to take a seat.

It was fine. All I had to do was get off at the stop that matched the name I had. Well, I guess that was the generic name for street (in Italian) because the first two stops had the same name. I got off at the second stop, thinking I had missed my stop at the first one. And this is when the full on panic set in.

The Anxiety Attack Outside of Rome

Another guy had also gotten off at the same time as me. In an effort to mask me having a full on anxiety attack, I was trying to hide the fact that I was sobbing. I didn’t do a very good job. Not only was I was in a foreign country where I didn’t speak the language, but dogs were also barking ferociously in the near distance. I genuinely thought I was going to be sleeping on the streets that night, potentially woken up by the mauling of those dogs.

The individual heard my ragged breathing and turned around asking, “Are you alright?” I expressed I was lost and didn’t know what to do now. I asked him if he knew how to get to the address I was attempting to go to. He said he was relatively new to the area, but his roommate was a police offer and he could go ask him.

He took sprinting down the side road and a sob escaped from me. I was never going to see that guy ever again. But what choice did I have except to wait and hope that he would be true to his word? So I stayed there with my luggage, on the side of the road, in the middle of the night. What seemed like an eternity later, which I’m sure was actually only like 8-12 minutes in reality, this man came sprinting back with his roommate. I don’t think I’ve ever been so happy to see an individual before.

His roommate kindly presented a may and explained how I was to make it to my Airbnb. Don’t get me wrong – I genuinely appreciated everything this man was saying, but I could not grasp anything at this point, so I just blankly stared at him. Finally, he said, “Would you just like us to drive you over there? It’s not too far”. I nodded my head pitifully – remembering back to my college graduation when the president had shared ‘Just look pitiful and people will help you’. I was also thinking that this goes against everything my parents have ever taught me and having the movie ‘Taken’ at the forefront of my mind, I climbed into the car with the two Italian men who’s names I knew not. Lol…when in Rome, right?

When in Rome: The Lesson Learned

Turns out, since I’m sitting here writing out this story and not dead on the side of the road somewhere, they were both good men genuinely trying to help out a lost tourist. All this to say: don’t be afraid to ask for help. Whether you’re travelling to Rome or just in your daily life, we all lean on each other for support. It’s necessary; we can’t do it all on our own. So ask. As my cousin always says, “Ask and you shall receive”. And there’s the other saying that closed mouths don’t get fed. Also be the person who lends a helping hand. It makes all the difference, and helps in creating a world a better place.

I will include the disclaimer to always trust your gut/instincts. Not once did I get a bad vibe from either man, but had I, the situation may have ended up completely different. Although at this point, I was pretty desperate so who knows what I would have done had that been the case. Thank goodness I don’t have to find out!

As always, thank you for reading! Do you have any getting lost stories to share? I can’t be the only one! I’d love to hear about them in the comments 🙂