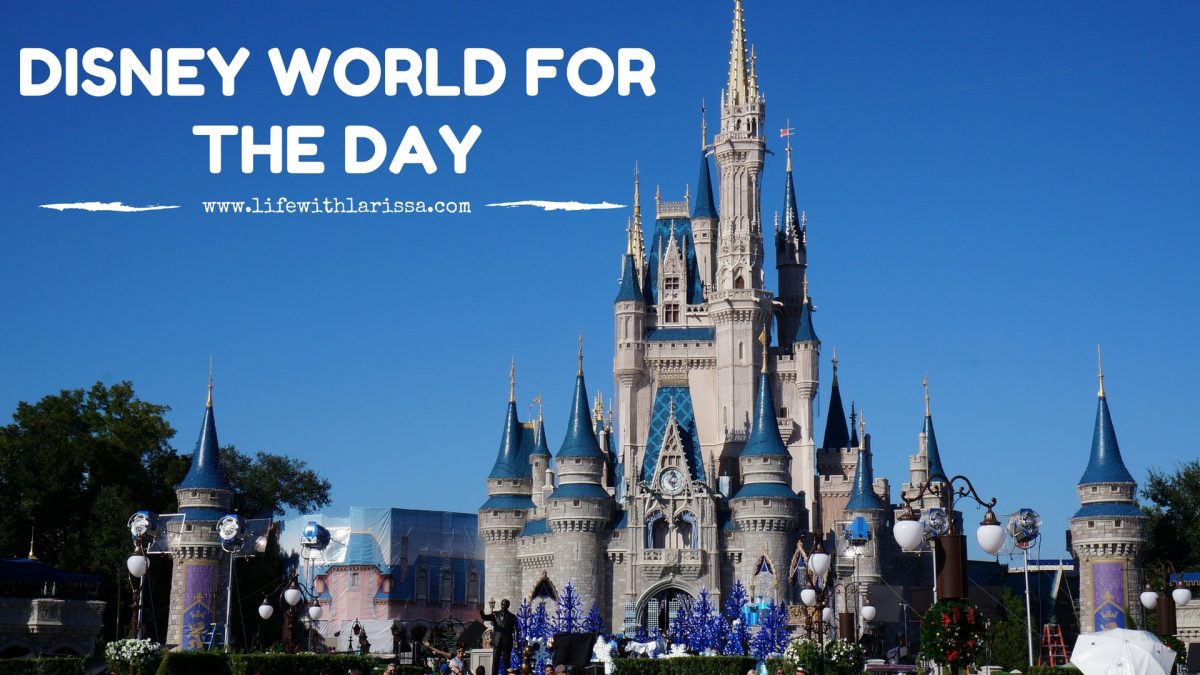 A few weekends ago, my sister, Brit, and I were able to travel to Orlando, Florida. We were meeting up with one of our long-time friends for one day, and staying with our cousin for the rest of the days. We also had the opportunity to visit both Disney World and Universal Studios while down there. It was my sister’s first time in both parks, so it was exciting to see her reactions while experiencing the parks. In this two part series of our adventures, you’ll read about our experiences at the parks! This post is dedicated to our time at Disney World!

Our trip started on a Friday morning, promptly at 5:00AM. We had both gone to bed pretty late the night before, so the first couple of hours on the road were pretty rough. After we stopped to eat some food and guzzle some coffee though, we were good to go for the rest of the day! We made pretty good time, and arrived at our destination a little earlier than we expected.

Our first stop was Disney World! We headed to the Wildness Lodge to meet up with our life-long friend, Court, who works at Disney. After she changed out of her work clothes and we had some time to freshen up, we immediately headed to catch a boat ride to Magic Kingdom.

As we passed security into the actual park, Court was bouncing on the balls of her feet! She could not wait for Brit’s reaction when her gaze landed on Cinderella’s Castle! The castle is a lot bigger in person than people imagine it. Brit was astounded at the sheer size of it, and marveled at its wondrous magnitude.

We continued on our way, and headed straight for the Haunted Mansion ride. Court had set up fast passes for all of us, so we hopped right on. The ride moves at a consistent speed the whole time, so that was good for me [since I’m not a fan of roller coasters…AT ALL]. When we got off the ride, we made our way to find a spot to watch the Festival of Fantasy! This parade of Disney characters happens every day at 3:00PM, and it’s so worth it to take time out of your day to watch. Not only is the music great, the characters get so into it, and it’s a lot of fun! People from all over, of all ages gathered and lined up to watch this parade!

Tip: I would recommend downloading the free Disney app, so that you’re able to create fast passes throughout the day! You’ll also be able to see wait times for various rides, and the app has other cool features that are helpful!

Right after that, we headed over to Space Mountain and met up with Court’s boyfriend. I had previously told Court, I was fine with riding roller coasters that were indoors, because they can only go so high. Court even continued to assure me, letting me know if wouldn’t be that bad because it was dark, and I wouldn’t see much. Well, after going on that ride, I can assure you that I will no longer let people know that I am fine with indoor roller coasters. My sister was laughing so hard from me freaking out, that she didn’t have time to be scared. And sweet, sweet Court was even nice enough to warn me when a drop was about to happen, and as much as I truly appreciated that, you will never find me on that ride again!

When that ride FINALLY ended, we jumped on the People Mover for a more friendly, relaxing “ride”, then we made our way to Peter Pan. Peter Pan is also a nice, family-friendly ride! You hop on a ship, and you fly through the story. It’s pretty cool! Before we headed out, we made it over to ‘It’s a Small World’. When we walked into the ride, it was bright, sunny, and hot. About 15-20 minutes later, when we walked out of the ride, it was monsooning! The poor lady who was working at the ride was trying to shuffle everyone out from under the covering since the only exit to the ride was where everyone was standing. We all looked at each other, and decided to make a run for it. We made it all the way to the front of the park, before the lightning and thunder got really bad! We stopped and took cover at one of the stores for quite some time. We were worried the rain wasn’t going to stop.

We decided to make a run for it anyway. As you passed under the entrance gate, we passed someone wringing out their shoe, and water gushed out! It was pretty funny to see, especially since we understood his pain. Court was the only one with a rain jacket, but we were all thoroughly drenched! Even though it was pouring, we made the executive decision to still go to Animal Kingdom. Thankfully as we were heading in that direction, the rain turned to a slight drizzle, then stopped altogether!

Due to our time constraint, we were only able to do a limited amount. We first made our way to the Tree of Life, so Brit could see it in person. The tree has more than 350 animals carved into its bark, and it stands proudly in the center of Animal Kingdom.

After we admired the beauty of the tree, we got in line for The Lion King Show. This show is my all time favorite show out of all the ones I’ve seen at Disney. Not only do they engage the audience in various ways, the show itself is so mesmerizing. There are tumblers, stilt walkers, people dressed in various animal costumes, and so much more. The talent displayed is second to none, and even though I had already seen it before, it was like this was my first time!

After the show, we made our way to the one and only Pandora – World of Avatar. 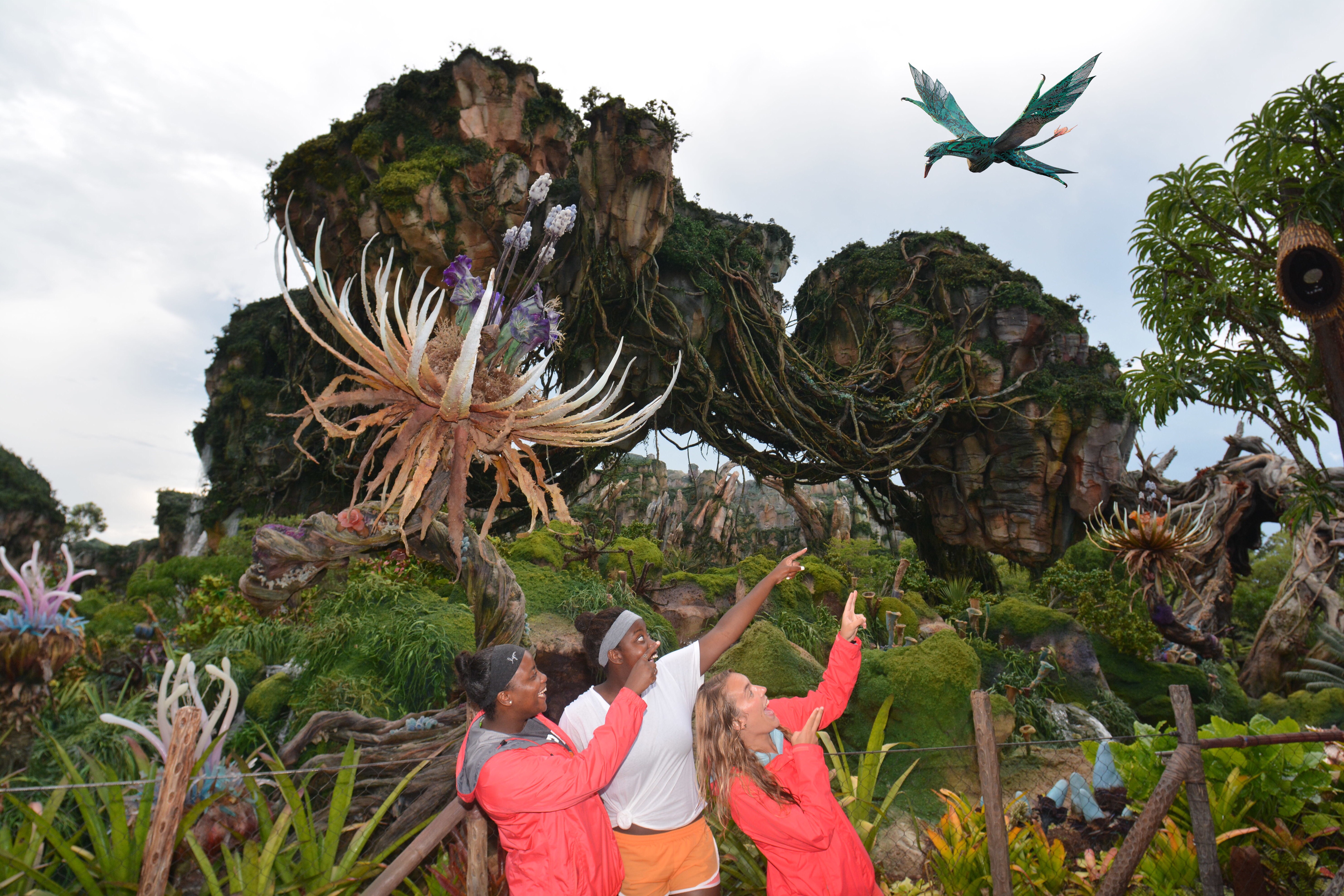 The detail was incredible, and apparently every night, the world glows. Unfortunately, we were not able to see it in full glow action because we had to go right after the ride. We did see bits and pieces start glowing though, and that was pretty cool! There are also certain places on the trees and plants that you can hit, which will cause a sound to be released! We definitely would have not known that if Court hadn’t have shown us.

Court scored us some fast passes for one of the rides, ‘Avatar Flight of Passage’, and it was incredible! For this ride, you are fully immersed into the world of Pandora. Each person gets synced with an Avatar and you experience flying through Pandora on the back of a Banshee through your Avatar. If you go to Animal Kingdom, I highly recommend you make time for this time!

Right after this ride, Brit and I had to go. We had promised our cousin we would have dinner with us, and by this time it was close to 8:30PM. As much as we wanted to stay, Court walked us to the exit, and we parted ways! We’ll definitely be back to experience Pandora in all of its greatness!!

Tune in on Wednesday to hear about our time at Universal with our cousin, and her co-worker!

26 thoughts on “Disney World for the Day”