I can’t be the only one who has questioned the methods of boarding a plane. Check out my thoughts on the matter! 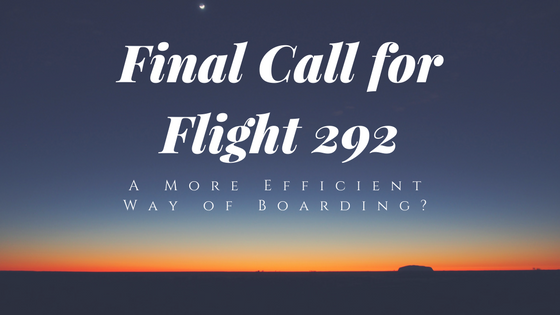 Everyone who has travelled by plane has heard some variation of these words. Of course

it makes sense to board those seated in first-class first, and then work our way to the back of the plane. But if we really think about it, does that really make sense? Is that the most efficient way to load a plane? Personally, I don’t think so.

I’m sure most of you have experienced the long line in the aisle waiting for people to put
their bags in the overhead compartments and watching them squeeze into their seats. Only then can you inch your way by. Slowly, but surely, you’ll make it to your seat because there’s no way that plane is taking off without all passengers seated with their seat belts on, with their tray tables up, and with their chairs in an upright position. If you’re lucky enough to be first-class, then you probably haven’t experienced waiting in that line, but I’m sure you’ve accidentally gotten hit by bags on more than several occasions. Trust me on this one; no one likes hitting people with their bags as much as people don’t like getting hit by bags. Hmmm…if only there was a way in which this problem could drastically decrease.

Would it really be that crazy to board the plane from back to front? I feel like most issues would be eliminated if this became the standard procedure. Boarding would be quicker and more efficient! I know, I know. What about the first-class individuals? I understand they pay more for their ticket, but honestly, who wants to be on a plane any longer than they actually have to? If this got put into effect, first-class would technically have more time to catch the plane, leaving time for essential things, such as last minute packing, or an emergency trip to the bathroom. Imagine all the snacks you* could grab or the meals you* could enjoy. You’d* get all this extra time most people would kill for! Then you’d* mosey on over and you’d* get on the plane and then it’d be time to leave. How cool would that be? Like the plane was waiting just for YOU*! I know I’m being a bit dramatic here. There wouldn’t be THAT much of a time delay, but hey, all those things are possible!

{*Would apply to first-class passengers only.}

Maybe I’m missing something here, and I’d love for anyone to enlighten me. Share with me your thoughts on how planes are boarded. Do you think it’s fine the way it is? Or is there a better way? Let me know in the comments!

0 thoughts on “A More Efficient Way of Boarding a Plane?”