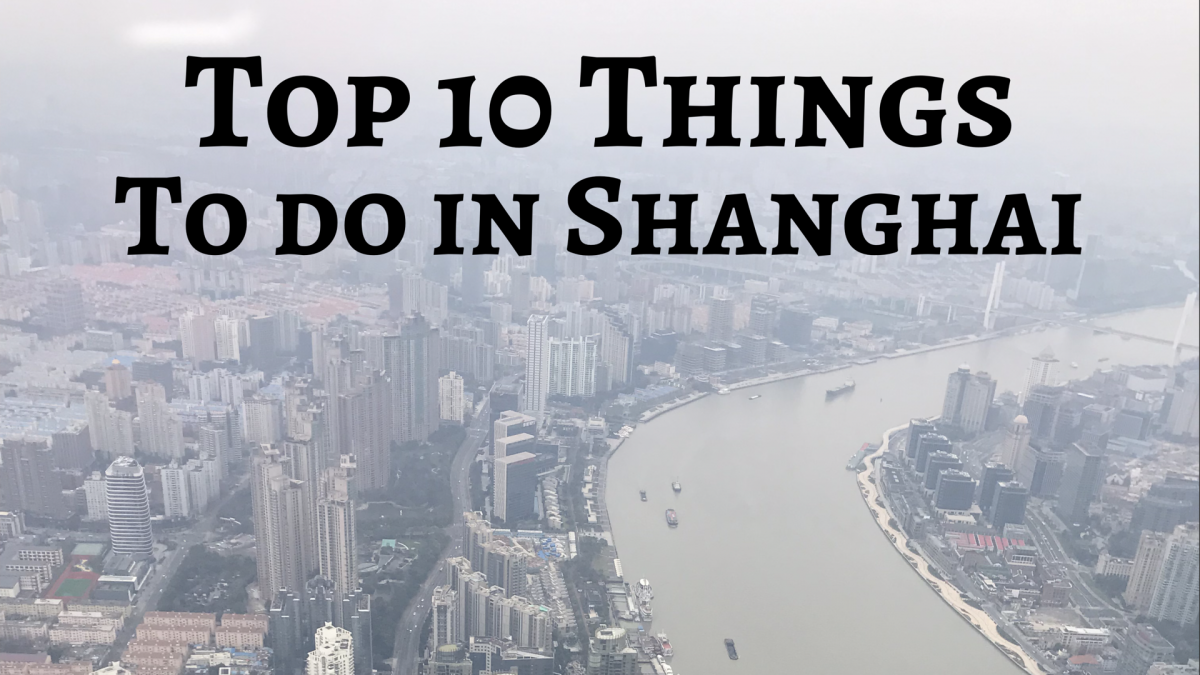 Our first stop of our grand adventure in January started in Shanghai. I flew out of the United States on New Year’s Eve, spending actual New Year in the air, not knowing when the countdown began or ended. It did not matter that much to me though, because I would be ringing in the new year in Asia, visiting different places, learning of different cultures, and sampling different foods.

Shanghai, China’s biggest city and also the financial hub of the country, offers so many exciting adventures for those passing through. We spent five days exploring the city, and had a blast doing so. Below, sorted alphabetically, you’ll find the top ten things I recommend doing while in Shanghai!

I cannot attest to how many dumplings we ate on this trip, but it was a great number. So many delicious options, and I even tried a “soup” dumpling for the first time. You’re given a straw to stick in the dumpling and drink, before eating the dough. Every single dumpling I ate was delicious. We went to Yang’s, which is a chain, and it’s so popular and we could see why! Our last day, we stopped by Nanxiang Steamed Bun Restaurant after hearing great things – and we were certainly not disappointed!

Although there are many temples to visit in Shanghai, I enjoyed this one because of its location. Completely surrounded by modern buildings and architecture, this temple stands proud among them exuding the history of the country.

Across the river from The Bund, one will find Pudong. Here you will find the financial center of the city. The Shanghai Tower, the Pearl Tower, and even Shanghai Disney Resort. If looking for shopping, there is a mall; however, if looking for more outdoorsy activities, there is a nature reserve!

I’ve been told this is like Chinese version of Cirque du Soleil; however, I’ve never been to Cirque du Soleil so I cannot attest to this. But I can say that this show was so impressive! I sat with my mouth agape pretty much the entire time. The stunts were insane and the energy was fun and positive!

This six-story museum is honestly one of the coolest things we did. Shanghai is a massive, sprawling city, and it is hard to imagine just how big until coming to this center. As the name suggests, one can learn about how the city plans came to be, and what they plan on doing next. On one of the levels, there is a scaled model of the city, and it’s worth it to go to the museum just to see this model – it’s that impressive! There was also a photography exhibit when we went, dedicated to the colors of Shanghai. The photographs were breathtakingly beautiful!

Until recently, the Shanghai Starbucks Reserve was the largest Starbucks in the world [now there is one open in Tokyo]. I had no idea when I visited, but I was impressed with the size of the store. Even though it’s only two stories high, the building sprawls out boasting merchandise, coffee, and food on the first floor. On the second floor, one will find tea, pastries, and desserts. If you’ve never been in a Reserve before [like me], then this will be a fun experience for you!

One of the most famous attractions in all of Shanghai is The Bund. Running along the Huangpu River, The Bund offers breathtaking views – especially at night. One can walk along the river and enjoy the scenery, or choose to go to one of the rooftop bars to enjoy the view. Dinner cruises are also an option, but whether you’re on the boat or watching them, you’re in for a delight.

Honestly, I would not have found this place if I was not with someone who had already been to Shanghai. It’s such a cute area filled with many shops and food stands. Even if you’re not planning on purchasing anything, it’s a fun place to walk through – but be careful. It’s a twisting network of alleyways, and some of them end in dead ends. It’s super easy to lose track of where you started, so just be aware if you’re like me and bank on backtracking to find your way back!

This classical Chinese garden is filled with beauty and architecture delights. Originally built as a place of relaxation for the designer’s parents, the garden now stands as a museum depicting the countries historical dynasties. Each element is purposefully integrated into the design of the garden, and the differences in the furniture represents the styles of the time.

The Zigzag Bridge is the way we arrived to the garden, and the surrounding area is filled with various shops and restaurants. The area is built to replicate the traditional Chinese architecture, and if you look close enough, you’ll find hidden treasures throughout. Two of the dumpling places we went to were both in this area, and we also tried some delicious tea at Fenghui Teahouse. There, you can also buy jewelry – our party bought a jade necklace, and a pearl bracelet.

Shanghai is filled with so many opportunities to learn about the city – whether you want to learn of the history, learn the different flavors, or learn of the modern city. You could spend days and days here and still not be able to do it all! If you’re going in the winter, be sure to pack layers as the wind does make the chilly temperatures even worse. Wishing you safe travels, and I hope this guide was helpful in your planning process in some way! As always, thank you for reading 🙂